Fan Directions During Summer and Winter

Ceiling fans have received their own unique improvements over the years, such as the addition of lights, use of different (remote) controls, and even the direction of the blades. Speaking of the latter upgrade, the blade movement of some newer ceiling-attached fans can now actually be changed.

Although the purpose of changing the spinning motion of ceiling fans is still not that well-known to some, it is actually vital to determining what type of ventilation you get in your room, particularly during extreme seasons, like summer and winter. If you want to know more about it, then please continue on with the article.

The Motion of a Ceiling Fan 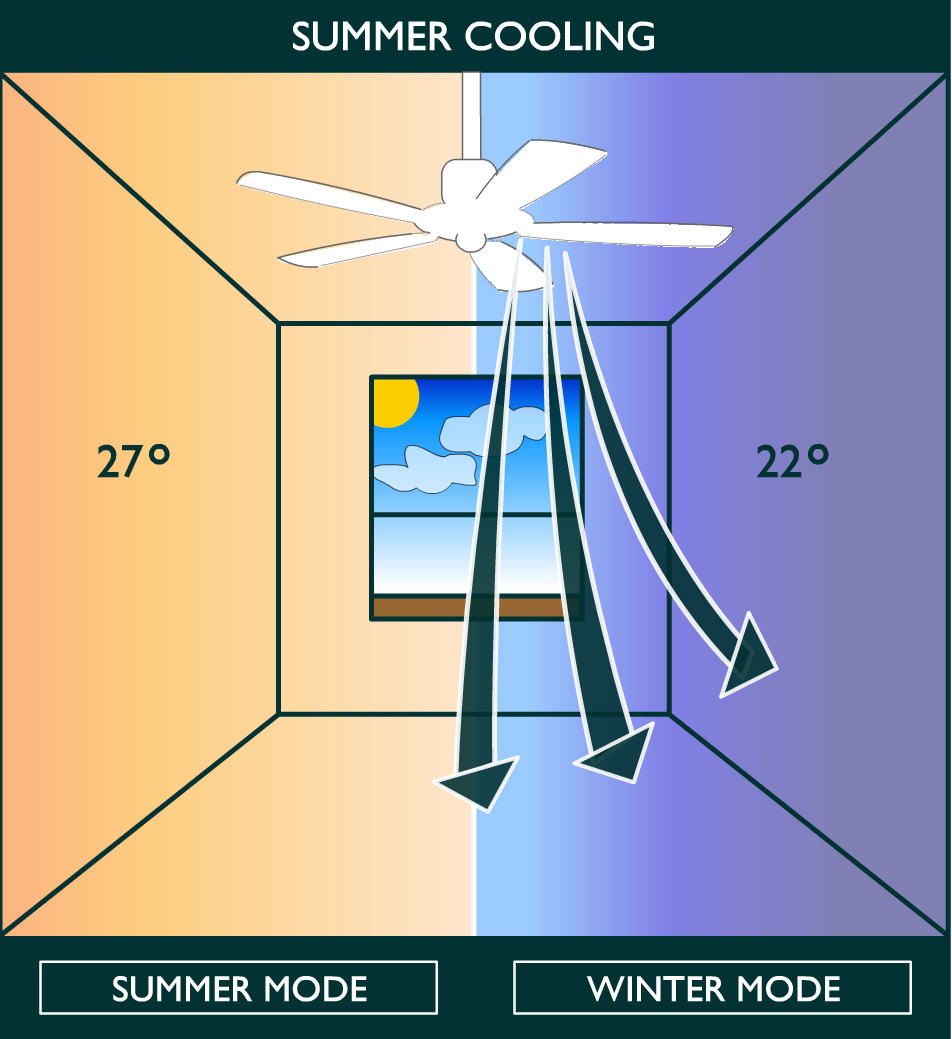 For most of its existence, the fan has always been used as a means for cooling off, since that is one of its main purpose. But with the invention of the ceiling-installed fan, and the innovation of dual-direction spin thereafter, this appliance can now also be used to keep yourself warm.

There are only two directions that the blade of a ceiling-attached fan can spin in: counterclockwise and clockwise. And depending on which direction your fan is spinning, the motion of the room’s airflow will also vary, which will result in either a warmer or cooler breeze.

You might ask, what am I getting out of this? Well, a lot really. Aside from having the option to either cool or warm yourself, changing the direction of your fan’s blade, appropriately, will also be energy efficient by assisting your air condition or house radiator with their function.

Because summer and winter are the two seasons that produces the highest levels of their expected temperatures, hot and cold, respectively, we will also base the objectives of changing your ceiling fan’s spinning motion around them.

In the Summer the Wind Blows This Way… 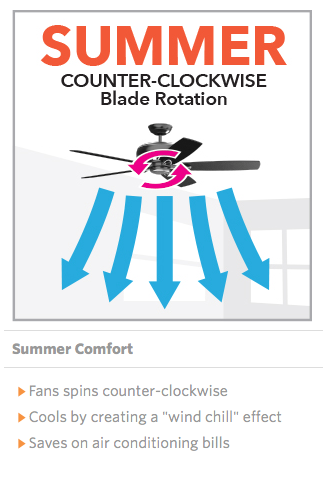 Depending on your location, or the country you are living in, the heat of your summer may differ from that of others. But regardless of the degree, an increase in temperature is still expected during this season, unless of course you are living in the arctic.

For the summer seasons, the direction at which your fan blades should be spinning is counterclockwise, which is also the default motion of most similar appliance. This direction will help push the cool air in the room downwards and on to your skin, creating a chill effect. But which way is counterclockwise?

Even though most of us are already familiar of which way counterclockwise and clockwise goes, some are still apparently having a hard time telling the two apart when looking at their ceiling fans. You might even experience the same issue as well, but it’s nothing to be ashamed of, since it can, actually, be confusing at times.

To precisely identify a counterclockwise motion, simply do the same as the abovementioned method, but this time, instead of feeling the airflow, pay attention to the blades, or just the top one for a better point of reference. If your fan is spinning in this direction, the top blade should move to the left, down, then right, back to the top again, and so on.

And in the Winter, the Wind Blows That Way… 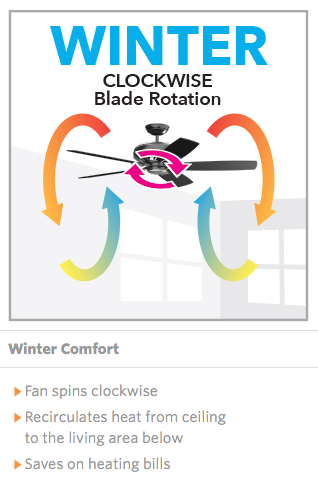 The spinning motion of your ceiling fan during winter is just the opposite of that during summer. Activating the clockwise motion of your unit will depend on its model. Some will usually have a small switch on the side of the motor encasing, while other high-end brands can be changed via remote or wall switch.

When the fan blades move clockwise, the cool air is directed upward, which then flows up to the ceiling and towards the walls, and finally back to the floor. This forces the air down to the sides and corners of the room instead of directly on to you, keeping you chill-free. As for correctly identifying this motion, just do the opposite of the aforementioned counterclockwise method.

This information may not seem much for others, but you can actually save up to 40% of AC cost and 15% heating cost just by applying them. Plus, you’ll be far more comfortable during winter and summer.